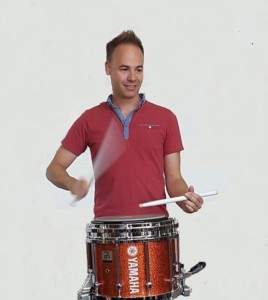 Michael Beauclerc has established a diverse and exciting career as a professional drummer, percussionist, composer, and author in Canada. He is also a busy marching percussion clinician for Yamaha Music Canada, having performed over 300 clinics from coast to coast. Currently, Michael is the Editor in Chief of Drumline Magazine, and the Executive Director of the Canadian Drumline Association. Michael is also the percussion head of the St. Michael’s College School Drumline in Toronto ON, Oak Ridge Percussion in Colborne ON, Trinity College School Drumline in Port Hope ON, and a consultant and composer for several additional scholastic drumlines. His books “The Mad Practice Pad” and “Developing Modern Drumlines” have become the literal foundations for Canadian drumlines and marching percussion instructors. Michael continues to be a busy performer as a drummer, hand percussionist, and singer.

Michael was born in Peterborough, Ontario, Canada, where his father taught him his first “beats” on a plastic Muppet drum set when he was only two years old. Michael performed with his first rock band at age twelve, and was a champion snare drummer by age eighteen. He has performed across North America in several world-class drumlines, including the DCI World-class semi-finalists Kiwanis Kavaliers as the centre snare, and the WGI World-class finalists S.P.Y.E.

In 2001 Michael graduated with honours in Performance Music from Cambrian College. He has recorded and performed with numerous ensembles and artists, and has two decades of experience in percussion instruction and composition.

For more information or to contact Michael, please visit www.michaelbeauclerc.com